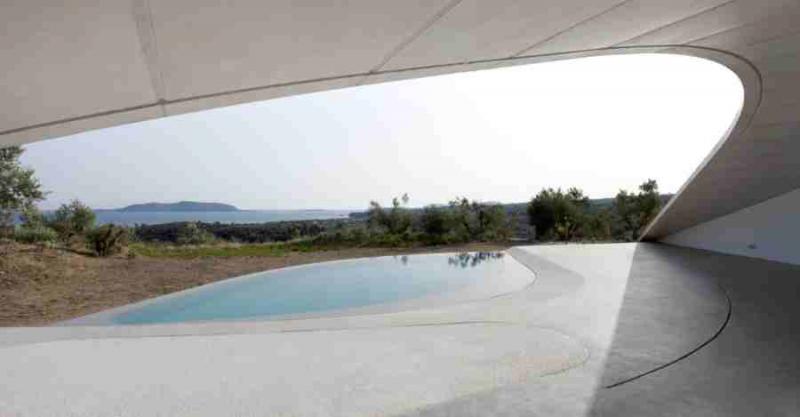 “Architecture does not need boring patterns”

Villa Ypsilon in Pylia, Messinia with its daring design sends a message of

freedom and gains the admiration of the public. It is a holiday house adapted to the natural environment, designed at a Y-shape by the architectural firm “Lassa”, led by Theodoros Sarantoglou-Lalis and Dora Sweijd.

The villa drew the attention of the public when its photos were published in Greece and abroad, straight after the construction had been completed, with many people giving their own interpretations upon the designing.

The “Εύφορη Γη” went to Villa Ypsilon and the architect Theodoros Sarantoglou-Lalis showed us around. He also sent a message to the new architects and said: “Even in tough financial conditions, the creativity and the good use of technology allow us to mock up innovative and economical projects. There is no need for architecture to be formulaic, determinate or boring. It has to be free.”

And, indeed, simplicity in the idea and implementation makes a great impression…

The inspired house was designed in order to be functional, environmentally-friendly, adapted to the landscape, to “frame” the exquisite view in three different point of the horizon and all this at a cost that did not exceed the budget of a conventional house of the same size. Geometry, orientation, the planted roof and plenty of other smart ideas save energy. The three basic axes of the house, towards the island of Schiza, the village of Lachanada and the sunset, create three spaces in the garden for the different hours of the day. Apart from the olive trees outdoors, Mediterranean plants like lavender and rosemary have also been planted; the stunning 12-meter long swimming pool, designed on geometry of the building, dominates the south side.

Mr. Sarantoglou-Lalis explained that for each new construction special research is conducted and then with current technology, knowledge and materials something new emerges. In this specific case, the houses from the Cyclades and the tomb of Agamemnon in Mycenae, whose triangular walls and the dome gave the basic shape of the creation, among others were studied.

The two architects, specialized in designing buildings of complicated geometries throughout the world, teach at a university in England; at the same time they are looking for new solutions and orientations, neither expensive nor conventional.

In this project the contribution of the civil engineer Vasilis Kosmopoulos was very important. The company collaborates with Lambros Bambilis in Greece as well, considering that the designers live permanently abroad.

Villa Ypsilon is undoubtedly to be admired and the architectural office has proposals to design hotels and villas in various places around Greece.